Natural running water that flows continuously and empties into another stream, into a lake or into the sea. This is the definition that appears in dictionaries of a natural element which we probably consider familiar but the majority of people do not know in detail. Rivers are much more than running water. Their flows serve as a means of life for numerous living beings and also serve as a means of transport for many others, among them the human being.

Rivers are a natural heritage which, apart from performing natural functions and providing us with water, they also constitute a resource of common interest and an ecosocial asset. Miguel de Unamuno said, "Rivers are the soul of the countryside". Indeed rivers are an integral part of the soul of territories and a reference point in the sentimental memory of people. Rivers have been the object of appreciation by human beings since they have inhabited the plant of water, Earth. Initially rivers and their waters were considered an integral part of the way of life of the earliest human cultures, many of which actually deified the goodness of a natural resource for which they felt profound and mystic respect. Rivers satisfied thirst, provided food and facilitated the transport of people and merchandise.

Later, with the appearance of agriculture, came the first aggressions against the woods along riverbanks which in many cases were deforested to use the fertile fluvial plains. With the development of agricultural technology, especially that associated with irrigation, diverse works (dams, irrigation channels, aqueducts, etc.) contributed to the increasing use of rivers, especially the waters, increasing the pressures on and degradation of the fluvial ecosystem. In addition to all of this we must add the use of the river as a source of energy, something which has been constant throughout the history of humanity, resulting in an important legacy of hydraulic infrastructure which was to change the fluvial landscape: mills, derivation channels, "batanes" (fulling houses), iron works and later, mini hydroelectric stations.

In the last few decades socio-economic development, while causing a progressive deterioration of the environmental quality of the water resource, has also diminished the links which human beings traditionally had with rivers. Traditional uses of the river have increased, creating important problems that have triggered off significant impact and have degraded the health of fluvial eco-systems. The use of the river as a resource (water, fishing, hunting, firewood, washhouse, bathing and strolling, etc.), a means of transport and source of energy, has seen the addition of the function of receptor of the waste we produce, especially domestic, industrial and agricultural-farming waste, much of it insufficiently treated. Also, the hydromorphological changes, the abusive extraction of waterflows, the fragmentation of flows for the construction of dams, the disappearance of the riverside forests, the proliferation of invasive species, together with the occupation of riverbeds and flood plains have all contributed to the environmental deterioration of rivers. And the worst is that we have come to this bleak panorama practically without realising it, losing natural heritage that contributes to the happiness and well-being of the humans.

Rivers need water, sediment, swells, space and time in order to develop. What is more, it is necessary to apply measures that contribute to improving their state of health and achieving the environmental objectives established in the Water Framework Directive (2000/60/EC). In the first place, we need to apply measures that make it possible to improve the quality of water establishing necessary infrastructure in matters of sewage and treatment. Secondly, deterioration needs to be halted by adopting measures of restoration and improvement in the state of the riverbanks and carrying out actions that make it possible to clear obstacles that impede the migration of fish fauna. Thirdly, we must guarantee safe and healthy supply but we must also share the water with the ecosystem and, for this reason, it is necessary to set up measures for the fulfilment of ecological flow schemes. And in fourth place, the consideration of river floods, natural phenomena typical of river dynamics that cannot be avoided, calls for the need to establish measurements for the management of the swelling of rivers or floods. For this, it is necessary to combine structural actions, in consolidated urban centres, with non structural measures, legislating the use of land on flood plains and good systems of prevention and hydrologic warning.

The key to setting up sustainable management of water and rivers focuses on the search for a balance between economic-productive uses, the maintenance of their of nature function and safeguarding and valuing their cultural, leisure, scenic, emotive, emotional and aesthetic aspects. Values which, until now, have escaped the vision of classic hydrology. It is also necessary to strengthen education and environmental awareness in matters concerning water, for a paradigm shift which establishes the bases of a new model that refrains from devouring the natural environment and whose challenge is conservation. Without conservation, sustainability is quite simply, a pipe dream Only on this premise and opting for the protection of the water environment can we build a more sustainable future, for us and for future generations, where rivers continue to be what they have always been, rivers.

Nearly three decades separate these pictures, both taken in the Basque Country and, as you may observe, little seems to have changed with regard to floods. At the present time we have diverse, totally efficient predictive systems and great possibilities when it comes to constructing infrastructure which greatly facilitate the prevention of these meteorological phenomena. Even so, as confirmed in the photos, there is still lots to do. Are you able to propose an initiative which you believe desirable in order to avoid floods and with them the problems and losses that are created?

It might be easy among the whole class. Have you heard of the word "brainstorming"? It is a way of generating ideas from all the group members, a frequently used tool by professionals in many fields, which will enable us to elaborate more and better proposals working as a group. Let's put it into practice: What can we, persons, groups, institutions, etc. do to prevent floods in our towns and cities? Each person must put forward actions which they think are suitable for resolving this problem. It will also be necessary for one of them to take on the role of group secretary and note down all the proposals in a notebook or on the board.

Most definitely numerous ideas emerge and to get many of them up and running only slight individual effort, as a class, as a centre, is necessary - perhaps we can contribute with our grain of sand. Think about it.

And all the other ideas? Those that are only possible with the cooperation or work of our town hall or regional government? So that things don't stop there, just in ideas, we have the opportunity to ensure these ideas reach the municipal authorities. Express these in a letter will not take too much work and will give our project more widespread publicity and, who knows, the possibility of being carried out. This way, we will also have given a lending hand to our towns. 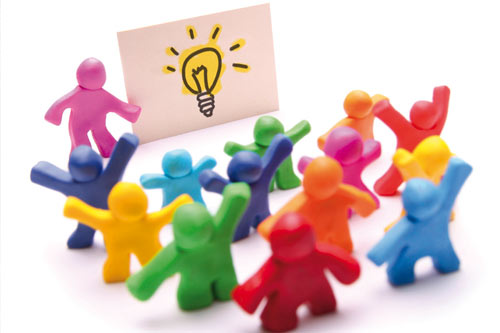