The cave art figures were discovered by Lorenzo Sierra in 1904, although he was only aware of the existence of a carved bear. Two years later M. de Cartailhac and H. Breuil discovered 3 of the bison. It was from the mid-20th century onwards that the remaining carvings were discovered.

Venta Laperra Cave is situated in the Basque Country, in the Karrantza Valley, in western Bizkaia. The cave lies at the base of Mount Mirón, which rises to a height of 714 metres and is the most westerly summit of the Peñas de Ranero, made up of Urgonian limestone. The cave has a large south-facing entrance, measuring 7 metres wide by 11 high. It is in this entrance and in the first hall one comes to after it, that one can find all the figures, which are perfectly visible in daylight.

Venta Laperra Cave is located in the Gulf of Biscay prehistoric cave complex. Other prehistoric shrines of the Basque Country are Arenaza , Santimamiñe , Ekain , Altxerri and Isturitz.

At the entrance to the cavern there is an archaeological site that was excavated by T. de Aranzadi and J. M. de Barandiaran who, besides this cave, also excavated the nearby Polvorín Cave. In the latter they found Aurignacian levels. The materials found in Venta Laperra, of lesser importance, may also be assigned to this period. Currently new excavations are being carried out by R. Ruiz Idarraga.

Beginning with the innermost figure (figure 5) and advancing from it towards the right or the outside of the cave, we can see: Firstly a bear (fig. 5). Its outline is almost complete. It carries its head slung low, and one paw per pair has been represented. Currently there is an eye in its head, but this is a modern-day action, as is clearly shown by the absence of a patina where the eye is. Furthermore, the eye does not show up in any of the old tracings and photographs.

To the right of this group there are some more representations, amongst them a bison (fig. 9). The animal's head is missing. Only the proximal halves of the hooves, and only one hoof per pair are represented. The animal has a line formed by moulding on the line of its belly. The other representations are divers lines. 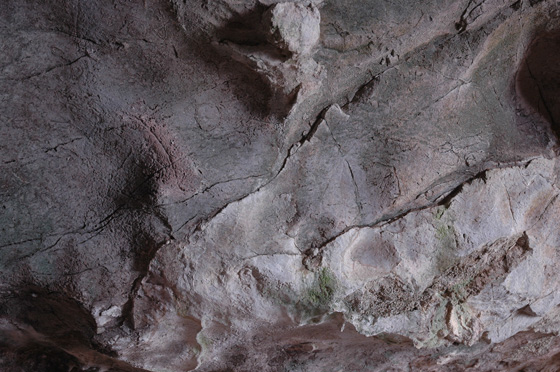 In the hall following the entrance, and starting with the left-hand wall, one can see figures 3 and 4, consisting of the hind quarters of two bison, facing one another and set just over three metres apart. The tails of both bison are raised and one of the tails (figure 4) is arched.

A little farther on from these figures and on the right-hand wall, one comes to another series of figures. 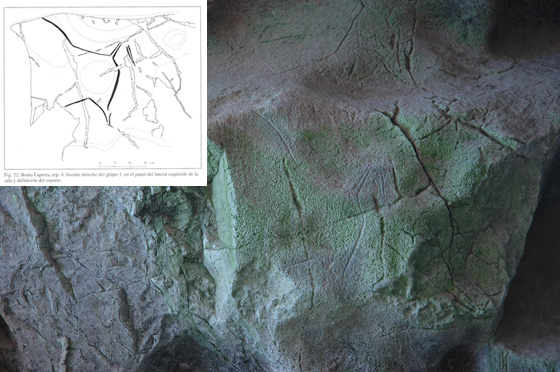 The first two representations are non-figurative signs and are located right at the entrance to the cave, one on the left and the other on the right. The left-hand one, situated not very high off the ground, consists of three groups of short parallel lines.

The right-hand one is in a slightly more elevated area and has been traced on the ground. This sign is a series of criss-cross lines. 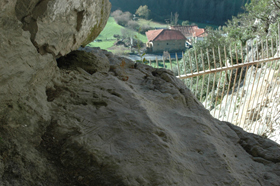 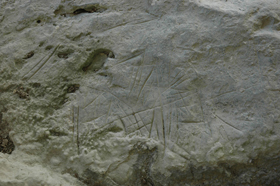 Panorama of the cave