The Governance Model is the key instrument in the real implementation of the Strategy and Operational Action Plan to reduce the Gender Pay Gap in the Basque Country. Given the multi-disciplinary, cultural and structural nature of the problem of the gender pay gap, the Basque Government has designed a multidimensional strategy to address the different intervening factors and, from its role as a driving force, it envisages the involvement and commitment of Basque society overall.

The Governance Model is based on an appropriate organisational structure for the implementation, monitoring, follow-up and assessment of the Strategy and Operational Plan, in order to offer maximum transparency between the citizenry and economic-social stakeholders. 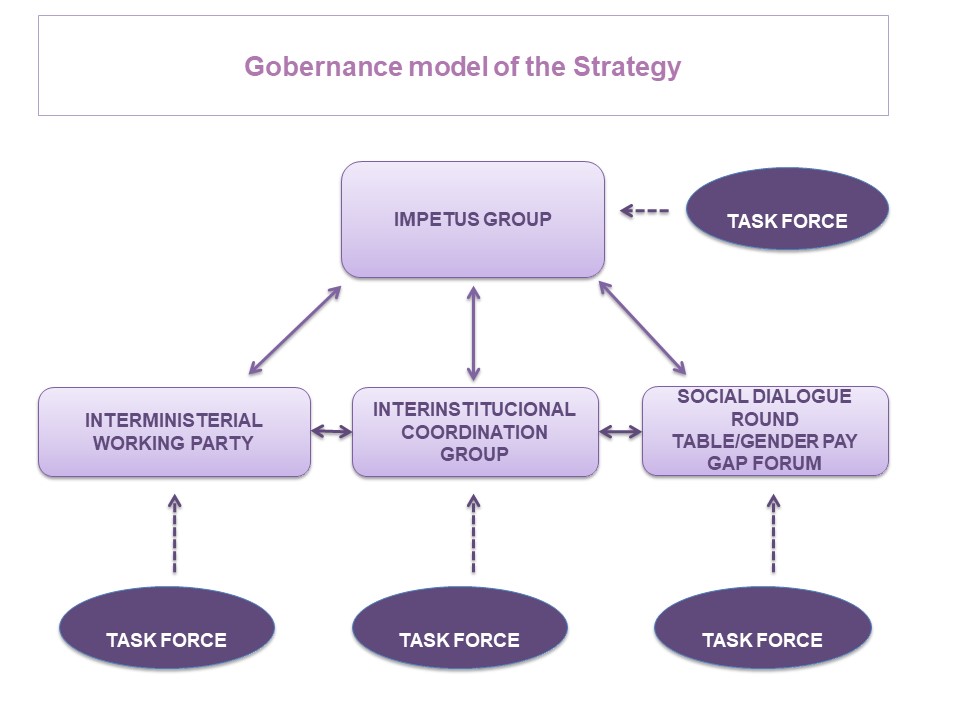 Consisting of the Premier’s Office General Secretary and the Emakunde General Manager with the senior officials of the Strategy and Governance of the Plan.

The Interministerial Panel comprises the senior politicians of the Basque Government’s ministries with significant remit in the implementation of the Strategy’s measures to reduce the Gender Pay Gap. This Interministerial Panel is tasked with coordinating the operational deployment of the Strategy, assessing the measures and results of the Plan, identifying the corrective actions and coordinating governance with the other stakeholders.

The Task Forces are made up of the directors of the different Ministries involved in implementing the Strategy, the Administrative Units for Equality of each ministry, and the heads of their respective Communication Areas.  Their main function is to drive the deployment of the Strategy.

Group consisting of representatives of different Basque institutional levels – Government, Provincial Councils and Local Councils - and its function is to coordinate and monitor the strategies and measures linked to reducing the gender pay gap in which they are involved.

Consultation and contrast space involving trade union and management representatives and which seeks to make progress in social agreements aimed at reducing the pay gap.

The Strategy and Operational Action Plan to reduce the Gender Pay Gap in the Basque Country envisages the implementation of 60 measures by six Government ministries and Emakunde-the Basque Institute for Women-, with the following breakdown of the goals:

Ministry of Work and Justice

Ministry of Employment and Social Policies

Ministry of Economic Development and Infrastructures

Ministry of the Treasury and Economy

Ministry of Public Governance and Self-Government